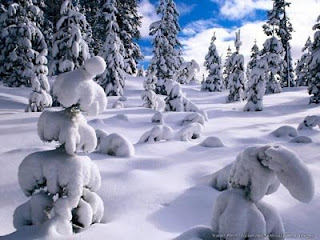 All I have is an acronym: WTF. So much for global warming. I am ready to welcome it with open arms. Seriously. Winter's grasp is so strong it has killed spring so far. Killed it. It was snowing last night and this morning with random flurries throughout the day. I want heat. Bring on a new medieval warm period like during the Renaissance! I want sunshine. I want to be able to cook eggs on the asphalt. I want more UV and sun cancer! Bring on the sun. We need more flatulent cows, more diesel fumes! Let's accelerate this thing!
Posted by Michael Powers at 12:32 PM 2 comments:

Relief. Euphoria. Exhaustion. Gladness. A bittersweet farewell. Well, mostly sweet. These are a few of my favorite things at the end of a semester. Just a few short hours ago I finished a paper. The paper was not all that well-written mind you, but I got it done. That's what matters. That, and there are no more papers until next fall. But, while I live in peace for this moment, finals looms on the horizon like those deep purple and black storm clouds that stroll in uninvited on a beautifully sunny spring day. I think some of you, if not all might be able to relate. But, why must it be so bittersweet? I mean I should be able to clap my hands together and sing Hallelujah and do back flips (I'm working on the back flips...maybe for graduation, if that ever happens). The semester is done! Shout from the bell tower! Run around Notre Dame with Quasimodo! Victory!

Ah, but then we miss our new friends, our old friends, and perhaps on occasion, even a teacher (cough). We miss the monotony of hours of class and going in and out of consciousness in class, or checking facebook during an important lecture. We miss the soothing ring of that bell when we get into class just in the nick of time. We miss those people in the front row who always know the answer and contribute such wonderfully pertinent things to class like their trip to Maui last winter and how much their cat barfed the night before. We miss it all. Oh the memories. Let us revel. Thank you for letting my parents spent thousands of dollars on this wonderfully life-altering and mind-numbing education. I am so looking forward to Grad school.
Posted by Michael Powers at 12:02 AM No comments: 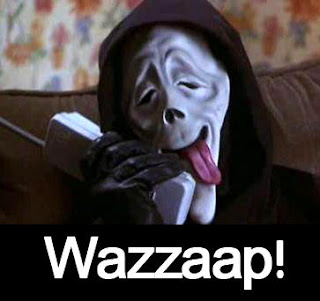 The cool kids with the sweet lingo don't get the important jobs that go places or change the world. The stubborn people who like books, reading, writing, and public speaking get them. Talk amongst yourselves.
Posted by Michael Powers at 11:53 AM 1 comment: 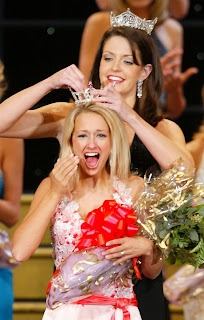 Everybody these days is famous in the blogosphere. Wow, just writing the word blogosphere makes me feel like some cultish cyber-weirdo (well, maybe I am). Some of you may never know. And, then again, some of you are probably just nodding your heads in agreement.

So, back to the point. With the advent of blogs, podcasts, social networking sites and the like, people who otherwise would have slid under the proverbial rug, are running the world. Some people, and occasionally I find myself falling into this category, prefer to get their news from blogs rather than CNN or MSNBC. It's almost like a total system upheaval...and, I kinda like it. But that being said, with the good blogs come the bad/mediocre/crap blogs.

Now, as much as I would like to think that there are lots of good ones, the truth is that most probably suck and are poorly edited (Some of you are thinking, "Yeah like this one"), but believe me, there are worse. And, I really don't think I need to give to a list of them, they're easy enough to find. But, even though people now publish through RSS feeds everything from their baby's first poopy diaper to diatribes about the weather, they aren't really published columnists. Much less authors. And, although some are, rarely are they even AP contributors. Often they are computer savvy college kids, bored teenagers, soccer moms or the unemployed. But, even though everyone chips in their two cents, the colorful myriad of poetry, satire, ramblings and photo journals is enough to cause one to be ecstatic. Or crazy. Or both. I am not some amazing author. Clearly. I have fun with it. But I guess we just need to be more discerning, because, most people can't write for beans (or any other food-like substance). Just because I have a blog, you have a blog and my friend's dog has a blog doesn't mean we're awesome...well, if you're the dog, maybe it does.
Posted by Michael Powers at 2:31 PM 2 comments: 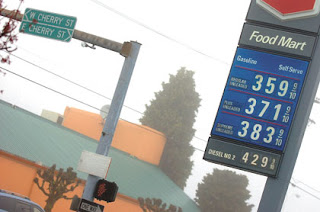 So, to bring this to a hopefully more hopeful conclusion, perhaps I should make a group that pushes for more development of our domestic resources, green energy and more hardline negotiations with the countries that make up the cartel that is OPEC. But, more than likely people would find that group too complex, and settle for the useless boycott. It never has anything to do with what is the best way to get things done; people just like to do whatever sounds cooler. That says a lot about America. And people in general. Maybe I should just play some Bob Marley and get stoned and forget about life for a while. At least then I could wake up happy and talk about Sheriffs, love, and not rocking my boat instead of facebook oil boycotts.
Posted by Michael Powers at 12:35 AM 2 comments: