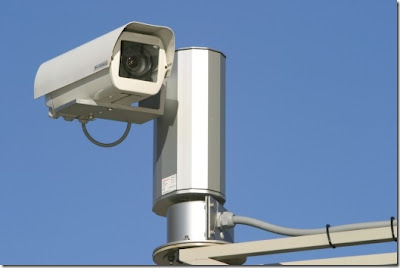 Back in the day, people used to make fun of mall cops and security guards by calling them "rent-a-cops" (well, actually, people still do), but now there is something far worse. You know we have become lazy as a society when robots are giving you speeding tickets. That's right. You heard me. Robots. Robots with cameras are out in force in several cities across the US. I mean, the cops can't be bothered with actually pulling people over any more. No, they need more hours free to stop potential shoplifters at Seven Eleven. 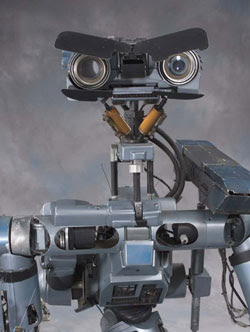 (This one bears an uncanny resemblance to the one that took my picture)
Just recently one of these robots took my picture. I was following someone and they ran a light. I probably should have waited (and hoped that they wouldn't ditch me), but I kept on following. Well, the robots didn't like that. The regular police didn't see me run any light. Not one police officer came out with their flashy badge and stenopad to write me up. Nope. I just got a fine request sent in the mail a couple weeks later. LAZY. I bet it was a robot secretary that mailed the fine from the robot cameraman at the intersection. Next thing you know T-1000 is going to put his silver liquid metal spike hand through your face for not telling him what he wants. 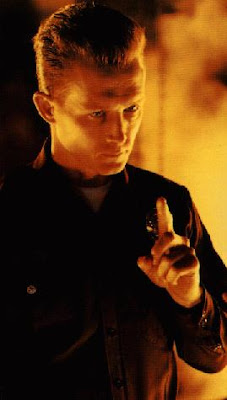 The moral of this story is that robots are taking over and there's nothing you or I can do about it. We will probably all be annihilated and only John Connor will be able to save us. That is why I must now go back in time to save his mother and father him, changing my last name to Connor so the story fits.
Posted by Michael Powers at 12:37 PM No comments:

Something Special for the Ladies

This is for all the ladies:
Another rendition:
As you probably could have guessed, I am a fan of Flight of the Conchords (it took me 4 tries to type their name just now). However, my ability to type does not diminish my admiration for their cause. They just want do something special for all the ladies in the world. All it takes is a music video here, a blog post there, and we all can make a difference. I'm doing my part. And you can too. To help show your support for doing something special for all the ladies in the world post a comment below, or send a donation to:
435 Happy Lane
Kudzu, Wisconsin
Posted by Michael Powers at 8:09 PM 2 comments: