Obama's Plan to spend us out of debt

As many of you may be aware President-elect Obama plans to initiate largest expansion into public works projects since the 1950s. He plans to rebuild infrastructure (from roads, bridges, and tunnels, to re-equipping schools nationwide), and he has cited it as a right for all children to have access to the internet. Here's his plan:

—ENERGY: “[W]e will launch a massive effort to make public buildings more energy-efficient. Our government now pays the highest energy bill in the world. We need to change that. We need to upgrade our federal buildings by replacing old heating systems and installing efficient light bulbs. That won’t just save you, the American taxpayer, billions of dollars each year. It will put people back to work.”

—ROADS AND BRIDGES: “[W]e will create millions of jobs by making the single largest new investment in our national infrastructure since the creation of the federal highway system in the 1950s. We’ll invest your precious tax dollars in new and smarter ways, and we’ll set a simple rule – use it or lose it. If a state doesn’t act quickly to invest in roads and bridges in their communities, they’ll lose the money.”

—SCHOOLS: “[M]y economic recovery plan will launch the most sweeping effort to modernize and upgrade school buildings that this country has ever seen. We will repair broken schools, make them energy-efficient, and put new computers in our classrooms. Because to help our children compete in a 21st century economy, we need to send them to 21st century schools.”

—BROADBAND: “As we renew our schools and highways, we’ll also renew our information superhighway. It is unacceptable that the United States ranks 15th in the world in broadband adoption. Here, in the country that invented the Internet, every child should have the chance to get online, and they’ll get that chance when I’m president – because that’s how we’ll strengthen America’s competitiveness in the world.”

(Incoming White House Chief of Staff Rahm Emanuel had talked about expanding broadband access, but this is the first time the transition has formally proposed it.)

—ELECTRONIC MEDICAL RECORDS: “In addition to connecting our libraries and schools to the Internet, we must also ensure that our hospitals are connected to each other through the Internet. That is why the economic recovery plan I’m proposing will help modernize our health care system – and that won’t just save jobs, it will save lives. We will make sure that every doctor’s office and hospital in this country is using cutting edge technology and electronic medical records so that we can cut red tape, prevent medical mistakes, and help save billions of dollars each year.” 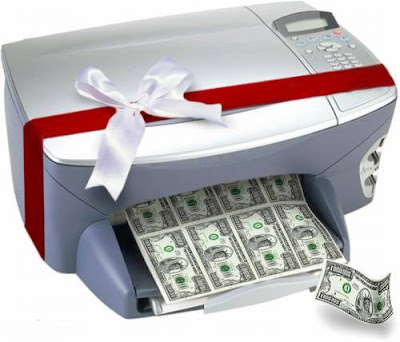 Now some of this plans actually make sense, but he has still been mum on what kind of cuts he is going to make if any. And other question, and it feeds off the issue I just cited is, WHERE IS ALL THIS MONEY COMING FROM? Our government has been dolling out trillions of dollars to bankers, lenders, and even some companies it has deemed as 'too big to fail.' So, in light of the fact that the dollar will be worth next to nothing in the next 6-18 months after the market reacts to this largess of meaningless paper printed out by the government, how does this same government expect to afford all these new initiatives? Since when did it make sense to spend money to get out of debt? Oh, that's right, governments can do that because they can print money by fiat to pay their debts...except they don't. They print money to support more systemically unsound debt which is bought and sold to bankers and lenders worldwide. 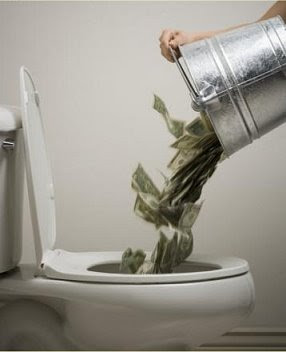 So I guess that was why I was a little taken aback when I heard that one of the public works projects to be undertaken was the world's largest ball of yarn (below is only a 1/20 scale replica). 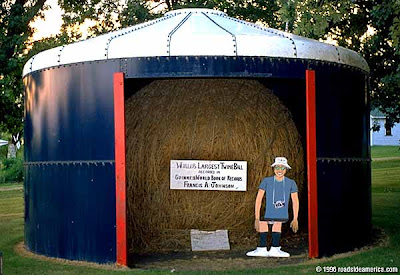 Set to be 50 stories tall, the ball will be situated in the middle of Kansas to give people a reason to visit the state even if they don't have family there.

"It will provide a way for Kansas to regenerate a tourist industry that was once vibrant. It will also allow Americans to use the new cloverleaf that the public works project initiative will be building right next to the yarn ball," said President-elect Obama.

Marjorie Glotus of Topeka said, "It gives me renewed faith in the government. Since the Wizard of Oz came out I have been scorned by relatives who live in Wyoming, even though we do have a pretty good basketball team, but now that we have a federally funded Guinness-worthy ball of yarn, I hold my head up high."

It makes me giddy.
Posted by Michael Powers at 12:44 PM

This money will come from taxing the wealthiest Americans whom the GOP decided, unaccountably, to redistribute wealth towards with ridiculous tax breaks starting in the 1980s.

By the way, has Obama taken your gun yet? He hasn't come for mine; I'm getting to be a little bit disappointed -- I mean, first he appoints Hillary instead of Bill Ayers, and then he doesn't even take my gun away and force me to swear allegiance to Gay Fascism; was it all just paranoia? Did Sarah Palin really not know what she was talking about. It's quite disturbing.

Well, I certainly wouldn't say it was the GOP who decided to dole out billions to the banking industry. It was led primarily by the democrats when they revisited TARP after its initial rejection. Hank Paulson and the treasury however, are responsible for pumping out another $2 trillion to undisclosed entities.

And somehow I don't think paying 35% or 33% is some huge break when a lot of Americans either pay nothing or anywhere from 10-25%. The "rich" would still be paying more if everyone was taxed at the same rate. Am I arguing for a flat tax? Ideally yes, but realistically there just need to be less tax brackets that aren't as disparate.

On another note, I don't own a gun, but if I did and lived in an urban community in a blue state I might be worried. But, in all fairness to Obama, he probably won't be able to focus on the gun issue right now because he'll be too caught up in creating the Second New Deal and engaging and disengaging in two wars.

As far as Hillary goes, at this point it doesn't have any immediate impact on me. Although I passed the written part of the FSOT, I got a letter today that said I don't get to take the verbal. So, after six months of waiting for the Qualifications Evaluation Panel to decide if my background and application panned out with my score...turns out I might be too white, too affluent, or just not exciting enough only just now finishing my undergraduate education.

Now I'll probably just end up writing for FT, the Economist, working for a Think Tank, NGO, IGO, or going into radio/TV. What misery.

(By the way, I am secretly supportive of Gay Fascists and was formerly one of Bill Ayers disciples. I am also Sarah Palin's illegitimate child)