Blagojevich, doomed by his name. 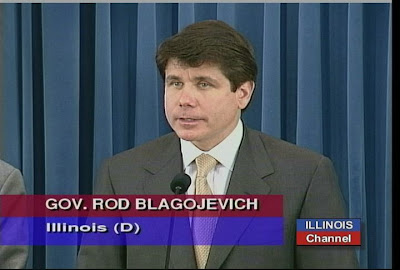 I'm sure you're all aware that the Governor of Illinois, Rod Blagojevich, was arrested by the FBI the other day. He was accused of basically trying to sell off Obama's vacant senate seat to the highest bidder. Being part of the Chicago political machine, Blagojevich's dealings did not surprise me.
However, what did surprise me was how a man with a name like Blagojevich manages to get elected in the first place. How many clever slogans rhyme with Blagojevich? Well, unless they're in a language spoken by a former eastern bloc nation, I have no clue. His name sounds messy, and, as it turns out, so is the way he practices politics. Are we surprised by this? Wait, I just thought of a slogan: Do you want no itch? Then vote Blagojevich! Or the anti-slogan: Yes he's a little b*tch, vote no Blagojevich!
Wow. That was unbelievably creative.
But let this be a lesson to us all. Politicians with ridiculous names should not be trusted. If the name in some way contains a 'b' a 'g' a 'j' and ends with ich, just run. Or, vote for the man named Bob Smith.
Posted by Michael Powers at 6:22 PM

Bob has two b's, I'm pretty sure he must be über corrupt. Just say no to Bob.