Props to the Prop that's propping the Prop 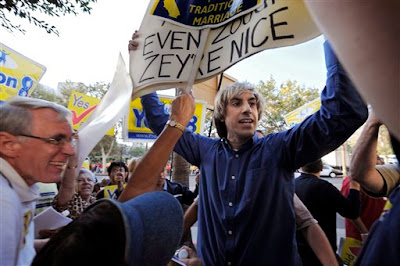 (Sasha Baron Cohen (Borat) crashes the party)
Out here in Provo, and I'm sure in other cities, counties, and states people have been promoting ballot initiatives. But, the interesting part for me is how many people here have no idea what initiatives or representatives are on their local ballot, but yet are deeply informed about California's ballot propositions. And, particularly prop 8.
I am not saying that you cannot, nor should not be interested in other states' initiatives, but I find it somewhat hypocritical to be promoting one, while having little to know knowledge about your own. The argument could be made that I shouldn't listen to you on the mere grounds that you have no idea what is on your own ballot. Of course I don't entirely believe that, because your knowledge of local politics does not transcend your moral and religious convictions, which are indeed important.
But here are some of the things that irked me a little bit, perhaps because of their zealotry, and perhaps because most of these people have never been politically inclined or willing to galvanize themselves over any prior issue, which may have had just as much import. These are some examples of facebook status lines and even text messages that I saw and received:
Voted! Yes on Prop 8!
Pray for prop 8.
Join with us and fast for prop 8
so and so has donated their status to remind everyone to vote Yes on Prop 8 today.
Yes on Prop 8!!!
hoping CA votes yes on prop 8!
is voting yes on prop 8!
*PrOp 8*8 pRoP
already voted Yes on prop 8 two weeks ago. And believe it or not, I'm not ignorant nor discriminatory... I even have two gay friends.
YES ON PROP 8! AND PROP 102 FOR ARIZONA!
reminds everyone to VOTE YES ON PROP 8!!!
VOTE VOTE VOTE! Mccain & YES to Prop. 8!!!!
is praying and fasting for the election. YES on Prop 8 and other important values!
Then there were people like me, who wanted to point out the perhaps unintended ridiculousness of it all:
Yes on 8... and 1A, 2, 5, 7, 9, 11 No on 3, 4, 6, 10, 12. Oh yeah... and John Galt for President.
And here was mine:
Michael gives props to props and those voting for props. He likes prop 345365462634523456345623.
So, any thoughts?
Posted by Michael Powers at 11:11 AM

My thoughts? People are stupid.

I'd be the last to accuse someone of not being informed about local props because I couldn't care less about Utah politics.

But it does amaze me that tensions can be so high about a proposition that doesn't effect me, my state, or my voting.

Hmm. Interesting take.
Speaking facetiously: Could you compare a facebook status with that of a political support sign parked on your lawn? (other than the former being more intrusive than the latter) So people are excited about something. It's about time. As an unrealistic optimist, I'm hoping that something like this will spur people to take a stand on other issues that, heaven forbid, actually apply to them. I think that voters should know what's going down on either side before they go vote. Took me 4 years to figure that out. I'm a slow learner. Yes, people are stupid but that's part of what makes us quintessentially human: we all have stupid moments. Are there actually people out there that have never had a 'stupid' moment in their life?

Catie, I would argue that no one has never had a stupid moment, but at the same time, I might be able to prove myself wrong.

Somewhat in response to Catie, kind of interesting how the Brethren have encouraged members of the Church so heavily to be active and informed in politics, but the only thing that people really get that informed about is Prop 8 (and oddly enough other California propositions). I guess we could just turn the US into the Republic of California instead. Being a California resident, I wouldn't completely mind. Of course I can't deny I'm not a huge fan of our political climate typically.

I disagree that one's opinions or passions concerning this matter are dampened in any way by a lack of knowledge of what was going on their own state's ballot. The fact is, this is an issue people knew more about and cared more about; and frankly, there's nothing wrong with that.

You may be right that people ought to know more about their own states. I can't make out any logical argument you made, however, as to why that should discredit their opinions on this matter. And it's certainly not hypocritical; you simply misused that word.

I disagree. I find it a perfectly legitimate use for the word hypocritical.

Here's another example of hypocrisy:

Me selling a gas guzzling SUV and then saying I drive a hybrid to prevent global warming.

And, for the record paragraph two makes it pretty clear that I didn't entirely buy my own argument, but thought it worth noting.