So spaghetti. I've decided it's overrated. Seriously. Americans need to branch out every once in a while. Like maybe try linguini, fettuccine, pappardelle, tortellini, ravioli, vermicelli, rigatoni, mostaccioli, manicotti, strozzapreti, radiatore, cavatelli or even campanelle.

And no, I didn't just copy those all from a list on wikipedia (ok, I did for some). But the point is, spaghetti is not the best pasta. It is the most consumed, that I will say, but I will never say it is better than half, or even a majority of the other pasta options. And, you don't have to use just RED sauce. There are pestos, and white sauces that are fabulous. And, stop eating sauce out of the bottle or can all the time. It usually tastes like tomato paste with a little oregano and basil. At least add some flavor to it if you have to use the pre-made crap. And, don't be afraid of cooking your noodles with tons of virgin olive oil and a teaspoon or two of sea salt. I promise you won't regret it. And balsamic vinegar isn't bad in there either. So enough with the cooking lesson.

It's true Americans could eat a little less KFC (JLo likes it), Burger King, Arby's, Carl Jr.'s, and frozen dinners. But isn't it fun to be slovenly? It's too much work to microwave a potato, so I think I should go to a place where it's pre-sliced, and deep fried so that it has no residual potato taste left. And corn dogs are better than eating a pot roast; and they're way cheaper. And with corn in the title, it's like I'm getting a two for one deal: a hot dog AND corn. I'm a friggin genius.

But then on the other side, I could sit around and eat just yogurt and lentils. Ah, then I'd be happy. And my farts would smell like gum drops I bet. I could frolic in a meadow with 12 necklaces around my neck and another 45 around my waist and read poetry to the squirrels. They would love me and bring over acorn tea and massage my feet with their bushy tails. Ah yes, and for breakfast we could eat amaranth and buckwheat and take rodent-sized dumps in the woods, or just go number 1 out the side that should be for number 2. 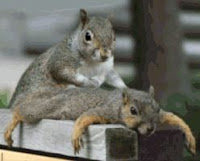 So perhaps the middle...is......No, it's not better. I'm living with the squirrels. And they better like fettuccine better than spaghetti. Good call on the pasta. Of course even a lot of our Americanized pasta selections are really so amazingly awful (God bless America though). I can't believe how many people love The Olive Garden, gag me. I was dating a girl that loved that place and I kept telling her, it really sucks. So we went to a real Italian restaurant near my home last summer and she finally understood what I meant. Anyway, spaghetti is pretty pathetic in general anyway as well. So yeah, I'm kind of surprised that there wasn't a recipe attached to this post. Think the squirrels have any good ones?

I hope so. I have some recipes, but I don't want to make this a cook book blog.