First off, I cannot believe someone would have the cajones to ask if Harry Reid was confident that this bill was big enough. I remember only a short time ago when people were up in arms about TARP's $700 billion price tag. Now people are wondering if this is enough? Are you serious? TARP hasn't done much thus far, so why do you think this bill will be any different? It's just a melange of pet projects and partisan pork. The point of a stimulus bill is to create jobs, spur investment, and strengthen the economy. All this bill seems to do is make a feigned or even superficial effort to address stimulus, all the while really just throwing most of the money at projects that are entirely irrelevant. Senator Inhofe's recent press release confirms my unease:

WASHINGTON, DC - U.S. Senator James Inhofe (R-Okla.), issued the following statement tonight after the announcement of a compromise on the Senate stimulus bill.

"While I appreciate the efforts of my colleagues to bring down the price tag of this bill, the fact is we still face a trillion dollar spending bill. Making it worse, the bill is 93% spending and only 7% stimulation. Over the past few days I have fought to include more in the way of real stimulus through higher percentage of infrastructure and defense spending, while working to cut much of the typical government waste often found in a bill of this size. Yet Democrats have blocked these efforts.

"The good news tonight is that the American people are catching on to the fact that this is the largest spending bill in history and are becoming more and more vocal in their opposition. My offices in Oklahoma and Washington DC have been flooded with emails, phone calls and faxes overwhelmingly opposed to this trillion dollar legislation. They can rest assured that my vote remains an unwavering ‘no.'" 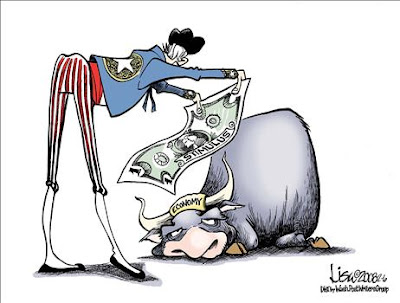 (If only this cartoon were what the government was really doing. As it turns out, they're fanning themselves with money while pelting the bull with loose change.)
Posted by Michael Powers at 3:07 PM

I was watching President Obama's press conference this evening and I think one of the most interesting statements he made was that the bill (I don't know whether or not to officially give him credit for it) was devoid of earmarks. I don't know what he's been looking at, but that definitely does not seem to be the case.

He's probably smoking something (He has before, and the being President can be stressful).

Sure they've taken out some token provisions to make it more appealing to those who have no spines and fear their constituency more than their principles, but it's still chock-full of pork, and possibly innards.