Adam Smith gets the last laugh

Here is a great article in today's Financial Times about Adam Smith and what he would say about the current economic crisis:

Adam Smith gets the last laugh

The free market is dead. It was killed by the Bolshevik Revolution, fascist dirigisme, Keynesianism, the Great Depression, the second world war economic controls, the Labour party victory of 1945, Keynesianism again, the Arab oil embargo, Anthony Giddens’s “third way” and the current financial crisis. The free market has died at least 10 times in the past century. And whenever the market expires people want to know what Adam Smith would say. It is a moment of, “Hello, God, how’s my atheism going?”

Adam Smith would be laughing too hard to say anything. Smith spotted the precise cause of our economic calamity not just before it happened but 232 years before – probably a record for going short.

“A dwelling-house, as such, contributes nothing to the revenue of its inhabitant,” Smith said in The Wealth of Nations. “If it is lett [sic] to a tenant for rent, as the house itself can produce nothing, the tenant must always pay the rent out of some other revenue.” Therefore Smith concluded that, although a house can make money for its owner if it is rented, “the revenue of the whole body of the people can never be in the smallest degree increased by it”. [281]*

Smith was familiar with rampant speculation, or “overtrading” as he politely called it.

The Mississippi Scheme and the South Sea Bubble had both collapsed in 1720, three years before his birth. In 1772, while Smith was writing The Wealth of Nations, a bank run occurred in Scotland. Only three of Edinburgh’s 30 private banks survived. The reaction to the ensuing credit freeze from the Scottish overtraders sounds familiar, “The banks, they seem to have thought,” Smith said, “were in honour bound to supply the deficiency, and to provide them with all the capital which they wanted to trade with.” [308]

The phenomenon of speculative excess has less to do with free markets than with high profits. “When the profits of trade happen to be greater than ordinary,” Smith said, “overtrading becomes a general error.” [438] And rate of profit, Smith claimed, “is always highest in the countries that are going fastest to ruin”. [266]

The South Sea Bubble was the result of ruinous machinations by Britain’s lord treasurer, Robert Harley, Earl of Oxford, who was looking to fund the national debt. The Mississippi Scheme was started by the French regent Philippe duc d’Orléans when he gave control of the royal bank to the Scottish financier John Law, the Bernard Madoff of his day.

Law’s fellow Scots – who were more inclined to market freedoms than the English, let alone the French – had already heard Law’s plan for “establishing a bank ... which he seems to have imagined might issue paper to the amount of the whole value of all the lands in the country”. The parliament of Scotland, Smith noted, “did not think proper to adopt it”. [317]

One simple idea allows an over-trading folly to turn into a speculative disaster – whether it involves ocean commerce, land in Louisiana, stocks, bonds, tulip bulbs or home mortgages. The idea is that unlimited prosperity can be created by the unlimited expansion of credit. 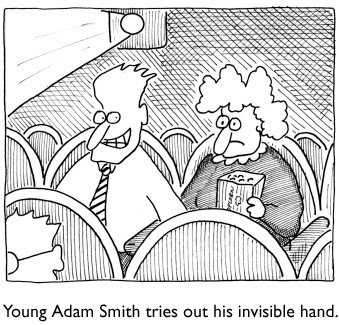 Such wild flights of borrowing can be effected only with what Smith called “the Daedalian wings of paper money”. [321] To produce enough of this paper requires either a government or something the size of a government, which modern merchant banks have become. As Smith pointed out: “The government of an exclusive company of merchants, is, perhaps, the worst of all governments.” [570]

The idea that The Wealth of Nations puts forth for creating prosperity is more complex. It involves all the baffling intricacies of human liberty. Smith proposed that everyone be free – free of bondage and of political, economic and regulatory oppression (Smith’s principle of “self-interest”), free in choice of employment (Smith’s principle of “division of labour”), and free to own and exchange the products of that labour (Smith’s principle of “free trade”). “Little else is requisite to carry a state to the highest degree of opulence,” Smith told a learned society in Edinburgh (with what degree of sarcasm we can imagine), “but peace, easy taxes and a tolerable administration of justice.”

How then would Adam Smith fix the present mess? Sorry, but it is fixed already. The answer to a decline in the value of speculative assets is to pay less for them. Job done.

We could pump the banks full of our national treasure. But Smith said: “To attempt to increase the wealth of any country, either by introducing or by detaining in it an unnecessary quantity of gold and silver, is as absurd as it would be to attempt to increase the good cheer of private families, by obliging them to keep an unnecessary number of kitchen utensils.” [440]

We could send in the experts to manage our bail-out. But Smith said: “I have never known much good done by those who affect to trade for the public good.” [456]

And we could nationalise our economies. But Smith said: “The state cannot be very great of which the sovereign has leisure to carry on the trade of a wine merchant or apothecary”. [818] Or chairman of General Motors.

* Bracketed numbers in the text refer to pages in ‘The Wealth of Nations’, Glasgow Edition of the Works of Adam Smith, Oxford University Press, 1976

The writer is a contributing editor at The Weekly Standard and is the author, most recently, of On The Wealth of Nations, Books That Changed the World, published by Atlantic Books, 2007
Posted by Michael Powers at 1:50 PM

Interesting read. I think the Dems wouldn't really argue with the core argument here, but I think what they say is they want a way to fix things so the full effects of the market don't hit us like a ton of bricks. I think it's a noble aspiration, but I just don't know that this is really the way to go about fixing it. Guess we'll find out eventually. Karl Rove ran an interesting article second guessing their methodologies in the Wall Street Journal.