Man eaten by his own Koi fish. 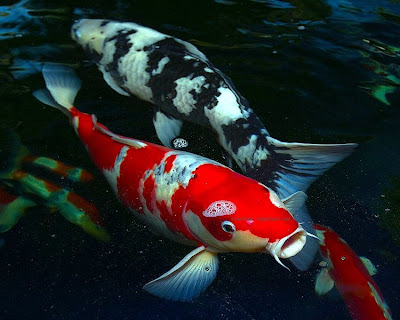 Just this morning, in a small peaceful suburban cul-de-sac in central California, terror reigned supreme. All was calm. Sons were playing catch with their fathers. Wives were shopping for scarves with their daughters. And Grampa Joe was feeding the fish. Little did they know, a brutal slaying would occur.
At 567 Coral Drive where Grampa Joe lived, he had a koi pond. He loved his fish, and he was meticulous about feeding them. Unfortunately, today was the day the food ran out. But, the fish didn't know that. As Grampa made his way out to the pond he noticed that one of the fish had jumped out of the pond. Seeing the fish, he stooped down to pick it up. However, right as he did, another fish splashed water at his feet. He slipped and fell back into the pond in a graceful swan dive.
Only hours later did anyone notice Grampa Joe was gone. But it was too late. He was devoured by his fish. After 3 hours of very vigorous nibbling, Grampa Joe was unrecognizable.
"Suzy and I were in the house knitting sweaters for the homeless. We were just having so much fun, we didn't even think about Grampa Joe. I guess we got a little carried away," said Carol, her daughter.
Dr. Martin, expert on koi fish from the Institute of Ichthyology in Dearborn, Michigan said, "This is very irregular. Koi fish are usually too lazy to move more than a couple feet a day. For them to have eaten this man is quite odd. I worry about this new phenomenon. I'm thinking about having a koi fish BBQ this weekend to get rid of mine."
Grampa Joe's funeral will be held at 42 South Redford Lane at Ahab's Funeral Home in Lemon Cove, California. All those who own fish, or loved Grampa Joe are invited.
Posted by Michael Powers at 1:35 PM

Wow. Next time I visit one of those zen-like Japanese gardens, I’m keeping my little ones away from those ponds. Thanks for the heads up.

love to see a link about this story....

koi eating grampa? seems like somthing you would hear about?

if no one was home to see granpa fall in then how do u know that he dove in like a swan???

I suspect there was some type of investigation and swan dive was the only explanation for the splash patterns. That or...maybe it's just creative license run amok.