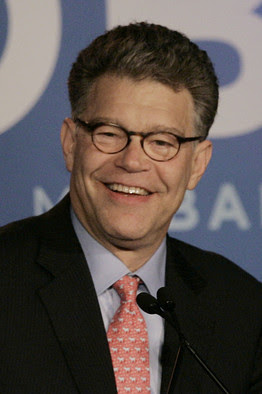 It's days like today that make me glad I don't live in Minnesota. It seems that Franken has been declared the winner after a shifty, inconsistently run recount that added votes to only his camp and subtracted votes from Coleman's. As it turns out, the message we can learn from this is that some people's votes can be counted multiple times without any one batting an eye, while others cannot have their vote count at all. That's democracy inaction. Here's an article about it in the Wall Street Journal.
However, it's not all about recount irregularities. As it turns out, the man in charge of the recount, Secretary of State Mark Ritchie, has used his sway to tell the canvassing boards to halt the count of the disputed ballots, and declare Franken the victor. Bear in mind that only a few weeks ago Franken was talking about having every vote counted. Now, as it turns out he only wanted votes in his favor counted, and when he got his politically motivated result, he wanted the process stopped.
I'm sure some of you think that I'm just bothered because Coleman did not win. That is not true. I would be fine with either candidate taking the seat with a legitimate recount. But that's not what happened here. This is almost like Chicago or Louisiana politics. No longer is the democratic process reified, but it is abused, extorted, thwarted, and in essence nullified. Unfortunately there is no legal ground to just hold another election, which, in my opinion would be the fairest course, given how miserably tainted the recount has been. So, it seems that if you have the secretary of state, and a couple of district canvassing boards on your side, you can make the election work out in your favor and steal a senate seat. It doesn't matter if the recount shows more votes than there are voters in the precinct. You've got your result.
Posted by Michael Powers at 12:29 PM

Tight race, questionable recounts, a higher authority coming in and declaring a victor before all the ballots had been recounted...

It's almost like if you have the Supreme Court and a brother who is the Governor of the disputed state, you can make the election work out in your favor and steal the presiden...

What were we talking about?