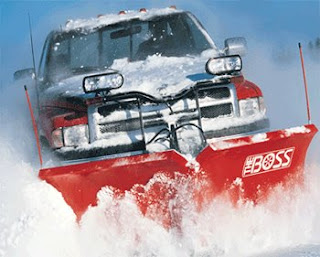 It has not stopped snowing here in Provo. It began yesterday. Bear in mind, I like snow. In fact, I would not mind if there were a blizzard outside. Basically, as long as it's in the right season I'm down with it. But, there is something I find a bit ridiculous about this snow and Utah. As most of you know (or perhaps you have no idea), on license plates out here in the great state of Utah there is a phrase. It says "The greatest snow on earth." Now, I'm not about to dispute that, but I do find a bit lacking for a place that had the winter Olympics in 2002 and a slogan like that to not have sufficient snow removal services.
For the past two days the streets have been caked with powder, slush, and ice. Occasionally plows come out and do their job, but their service is infrequent at best. Now, to juxtapose that with snow removal in Massachusetts - where at the first sign of a winter storm plows are grinding the pavement with sparks flying - Utah is inept. I really don't get it. Maybe they pay the plow drivers more in Massachusetts. Maybe they have more plows, sand, and salt in Massachusetts. I do not know. All I know is that if Utah is going to say it has the "greatest snow on earth," it better have the greatest snow removal services on earth to match it. I mean, it's not like Utah is not familiar with snowy streets. If they were going to take their slogan seriously they should have diamond snow plow blades encrusted in gold, to plow that beautiful Utah powder. Will it happen? Yes. When I become governor (which will be never).
Posted by Michael Powers at 7:24 PM

Actually, it's just Provo.
(and Kaysville, they cut their snowplow budget)

Salt Lake does a pretty good job. Except on State Street.

Michigan is also terrible compared to the great Commonwealth of Massachusetts. Mostly because the state has no money.

terrible at plowing, that is.