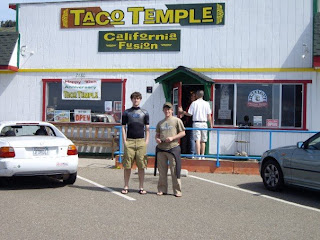 The Taco Temple: California Fusion. For a moment I want you to imagine a taco. Now I want you to imagine the best Mexican food possible. Now, if that weren't enough, imagine ingenious chefs and fabulous decor. Then you would have an indescribably holy experience with large quantities of Mexican ambrosia. I had the honey Chipotle tacos with mango cheesecake to top off the meal. It was fabulous.

Towards the end of our meal a server came out to pick up our plates. He was wearing a loose-fitting button-up shirt and khaki shorts and boats shoes. I doubted he was a regular waiter and figured he was the owner of the temple, or perhaps...the Temple President. Unfortunately Gary the man (a friend of mine) ruined the facade when he asked him if he was the owner and he said he wasn't, and that it was actually his first day there. I was befuddled at first, but then he said he was friends with the owner and that he came over from time to time to help out; he had his own restaurant nearby. But in my mind, I met the Taco Temple President.

It was not the first time I had been to this great restaurant in Morro Bay, and it certainly won't be the last.
Posted by Michael Powers at 7:48 PM