Paraphrasing a friend of mine, there are two kinds of people in this world: Those who are always busy, and use that as an excuse not to do things, and those who are just as busy, but somehow always seem to find time for things. I thought this statement was pretty accurate, except I think some people just aren't busy and don't do jack (much to Jack's chagrin). But those people aside, I want to talk about the people who are always busy and never seem to be able to find time to live life.
I'll call these people the "definite maybe-ers" because, they have a hard time prioritizing and organizing, so instead of saying "yes" or "no" they say "maybe". I have a feeling that I am not the only one to deal with this dilemma, so while it may seem that I am ranting, or complaining or whatever, I'm just trying to point out a trend that people can relate to. A trend that makes no sense for anyone.
Let me give some stark examples.
If you are invited to a wedding reception, or a wedding, more often than not (and by that I mean every time) you are asked to RSVP. I have never heard of someone RSVPing "maybe" to someone's wedding. It's just not practical. The couple cannot just spend an inordinate amount of money of tables and food for people who may or may not come. They need to know definitively. So, if I ever heard a "maybe" for my wedding or reception, I would take it as a "no", and, a slap in the face because the person could not deign me with an appropriate response. If I got that response, the person would most likely not remain a friend. Now, bear in mind a "no" is far more polite and I would not feel burned at all. 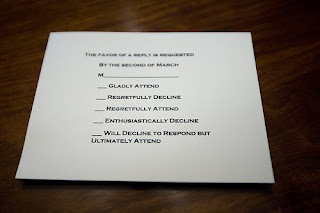 Another example would be if you're asking someone out on a date. Especially if the date is something that needed to be planned out in advance, like a concert or a nice restaurant. If the person being asked says "maybe", I would move on. It's not polite. How hard is it to pull out your planner, look at your schedule and either see if you're free or not? It's not. Now, if you are a "definitely maybe-er" you might have a bunch of "maybes" already penciled in, and that would cause you once more to say "maybe". Living life like that is ludicrous. Give a guy or gal a "yes" or "no". 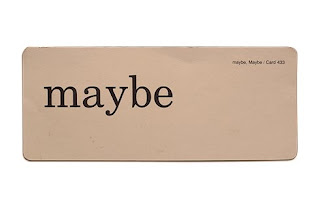 But here's where the problem comes from: Many people want to seem polite, or be "nice", so they do not give definitive answers and waffle out of fear of offending the other party. Well, the reality is, being clear and saying "yes" or "no" is not a mean way of interacting. It is honest, true, appreciated, and "nice". There is no need for ambiguity. Ambiguity makes things awkward for the "definitely maybe-er" and the person being "maybe-ed". So, the solution is directness.
If you truly don't know if you can manage something, there is a polite way to deal with it. You do not respond until you know for sure. "Maybe" cannot suffice. Neither can a "yes" that turns to a "no" or a "no" that turns to a "yes". I hope I'm preaching to the choir on this. What do you think?
Posted by Michael Powers at 6:22 PM

I think this is very, very true. Of course I can't deny that I often mark "Maybe" on Facebook invites. Typically if I mark "Maybe" though it means I'll be attending, but I'm sure I'm more the exception than the rule. I also try to switch it to attending or not attending about a day before the actual event, which is probably also an usual thing. Facebook should enable the ability to turn this option off though. Typically it's not a useful response, but it can be ok for some less formal events, ie my roommates send out invites to their intramural games and it's not like it's the end of the world if somebody shows or they don't.

crap this is talking about me, isnt it?? 0_o

No Morgan, it's something that's actually been on my mind for a while. And Scott I think you're pretty much spot on. With some activities it's not a big deal, but all in all it makes planning stuff so much easier to know for sure.

i've been trying not to do this anymore!
(but i still do)