Pickles. Delicious, crunchy, succulent, green, great on sandwiches, great by themselves. A treat. Pickles first came about around 4400 years ago in Mesopotamia. The art of pickling was carried out and well known to the Indians, Greeks, and Romans. And, later was taken to the new world by the Jews, who came up with a worldwide sensation with the "kosher" dill pickle.
The Kosher dill pickle is usually not kosher in the sense that it has been prepared under rabbinical supervision, which would ensure that no non-kosher ingredients were used, and that no utensil in contact with the pickles had ever been in contact with food that was not kosher. Rather, it is a pickle made in the traditional manner of Jewish New York City pickle makers, with generous addition of garlic to the brine (And, a little FYI - all cucumbers that become pickles become so in a vat of brine or vinegar). 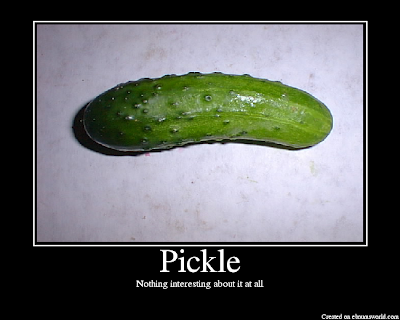 However, something startling has come to the attention of many eco-crusaders and climate change experts. Pickles, while seemingly green and innocuous, and in fact quite delicious are in fact causing a large percentage of CO2 emissions that are causing global warming. From when they are planted and harvested all the way to being served on a kaiser roll with pastrami, one solitary pickle produces more devastating amounts of CO2 than even a direct flight from Hong Kong to LA in a 747. 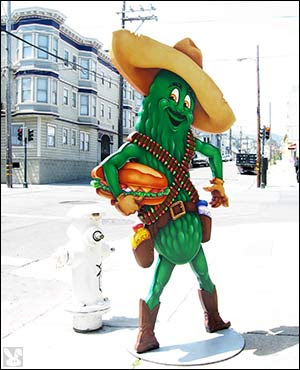 Lenny Badsteubner of Reuben's Deli in the Bronx had this to say:
"Pickles are my livelihood. They are beautiful. They are crunchy. They bring smiles to all the little people's faces. I refuse to believe they destroy the environment. They are the environment in my Deli."
But even with his clever turn of phrases, Lenny might soon be out of work. The NYPD has been formally charged with making a pickle task force in conjunction with EPA officials. Their mission statement is to be, "Green they may seem, but green they are not. Kill the pickles. Let them rot."
Fred McGruff, a local police officer stationed near a deli said:
"I don't know who thought of that stupid mission statement, but even though my brain says, 'whoa, this is rash, you love pickles Fred, don't do this,' my heart and my boss say that it's either the pickles or us. It's come down to the last battle. Either I support an industry that's bound to bring about the end of the world and I lose my job, or I start smashing pickle jars like it's the new prohibition. And it's not like we're getting rid of chocolate ice cream." 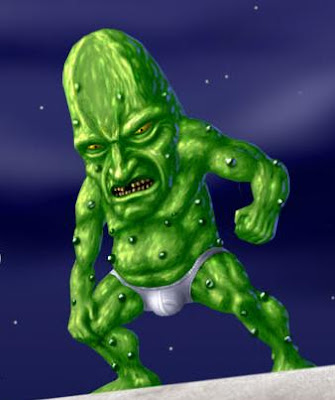 Pickles, while delicious, and perhaps even endearing to some, are in fact destroying the world. Just a jar of pickles is said to warm the earth's atmosphere more than a thousand homes with their thermostats set on 90 degrees all winter. Apparently the vinegar and brine solutions are made with the help of very exasperated old Jewish men who exhale more of the stuff than a coal plant. That, and shipping the pickles in hybrid cars only exacerbates the problem.
"I can't fit more than 3 big jars at a time in one of those hybrids, so I have to make lots of trips. That, and they say it's moot anyway because making hybrids is apparently less green than making normal cars. I'm at a loss. The only solution I can see is to just sell cucumbers on roadsides right next to the patch and call them pickles," said Benjamin Steinman of Kat's Deli said.
Whether the end of pickles has come or not remains to be seen, but, it does not look good. Cherished for centuries, pickles now face extinction. If only the Mesopotamians had known, this all could have been avoided.
Posted by Michael Powers at 12:47 PM

They make a pretty decent lightbulb.

i think i am too gullible to read this blog