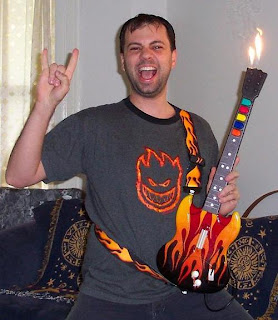 Activision, the publisher for the Guitar Hero games, told us during a sneak-peek interview that they were looking for a way to get even more teens excited about pretending to play music.
“The little plastic guitars with colorful buttons really made the instrument seem a lot less intimidating. Now we want to take that idea to accommodate everyone—not just those who like guitar music. We want everyone to be a hero!” 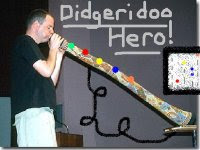 That’s right, folks, it’s finally here: Didgeridoo Hero! The didgeridoo is a wind instrument of the Aborigines of northern Australia, now available in your living room and compatible with XBOX 360 and Playstation 3. Didgeridoos are traditionally made from living Eucalyptus trees, which have had their interiors hollowed out by termites, but the controllers for Didgeridoo Hero are actually just large plastic tubes with a sensor on one end to breath into. The didgeridoo is a one-note instrument, and notes vary with instruments of different length. When we asked Activision what songs we could expect to see in the game they told us the classics “Dingo” and “the Kookaburra” were sure to be there. We’re expecting this game title to be an exhale-ent time! Activision said that Didgeridoo Hero is just one of many expansions to follow up their original fake-instrument game model. Also on the docket for this next coming year are Glockenspiel and Bagpipe Hero. The main spokesperson said of this new expansion-pack explosion, “It’s almost like playing real instruments, and even more almost like being a real hero!” 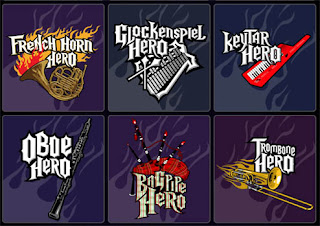