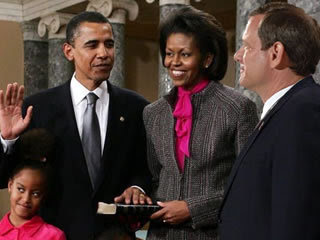 "The inauguration of President-elect Barack Obama will be an event of historic proportion. It is appropriate that the program will include some of the world's most gifted artists from a wide range of backgrounds and genres."
-Dianne Feinstein
(Really? Who'd have thought an inauguration would be historic? That just boggles my mind.)
For those of you included in the 5 million spectator projection for President Obama's Inauguration on January 20th, here is the full lineup, as released today by the JCCIC:
The order of the program will be as follows:
Musical Selections
The United States Marine Band
Musical Selections
The San Francisco Boys Chorus and the San Francisco Girls Chorus
Call to Order and Welcoming Remarks
The Honorable Dianne Feinstein
Invocation
Dr. Rick Warren, Saddleback Church, Lake Forest, CA
Musical Selection
Aretha Franklin
Oath of Office Administered to Vice President-elect Joseph R. Biden, Jr.
By Associate Justice of the Supreme Court
Musical Selection, John Williams, composer/arranger
Itzak Perlman, Violin
Yo-Yo Ma, Cello
Gabriela Montero, Piano
Anthony McGill, Clarinet
Oath of Office Administered to President-elect Barack H. Obama
By the Chief Justice of the United States
The Honorable Jogn G. Roberts, Jr.
Inaugural Address
The President of the United States, The Honorable Barack H. Obama
Poem
Elizabeth Alexander
Benediction
The Reverend Dr. Joseph E. Lowery
The National Anthem
The United State Navy Band "Sea Chanters"
And, if that weren't enough, there will also be a merry-go-round, balloon animals, and patriotic clowns on unicycles. 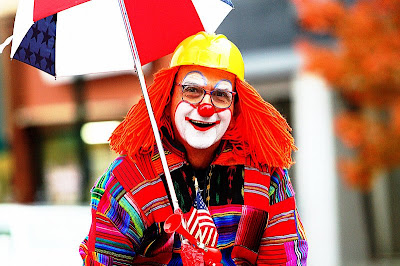 How about all of those honorable people too? Who knew.
Oh and Shakira is going to perform too. According to sources, the U.S. President-elect Barack Obama invited the star singer Shakira. Peruvian newspaper El Comercio reported "U.S. President-elect Barack Obama invited Colombian singer Shakira to perform in the White House on the day of his inauguration in January 2009." Obama said about Shakira: "It's an honor to receive so much support from someone that talented and a person that generous." Shakira endorsed Obama's candidacy before the election.

Posted by Michael Powers at 1:13 PM