The Humanity of a Baboon 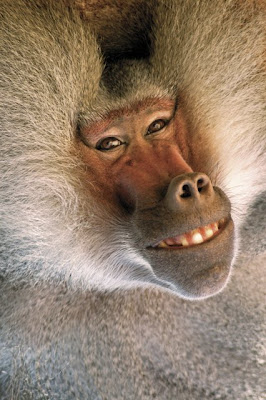 Baboons.
We rarely think of them, and when we do it is in a trifle and demeaning way. If our friend or sibling does something untoward or infantile, we might call him or her a baboon. Well, perhaps no longer.
A new study from San Diego State University claims that baboons have more humanity than we give them credit for. In fact, they might even be more human than we are ourselves. Head researcher for SDSU Dr. Julie Hammond said:
"I know as humans we generally find staring rude, but baboons have taken it to another level. If you stare at a baboon it is seen as a threat. He'll kill you. Perhaps that sounds draconian, but baboons seem to be more socially conscious and polite because of it." 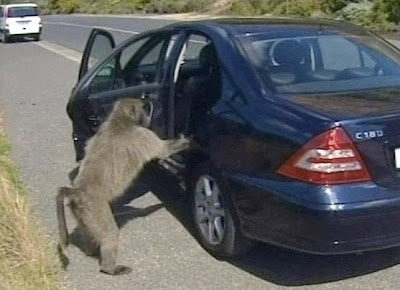 The main baboon in the study goes by the name of Rupert. And, just to mess with him, this reporter stared at him from behind. After about 15 seconds Rupert lashed out and began banging ruthlessly on the cage. 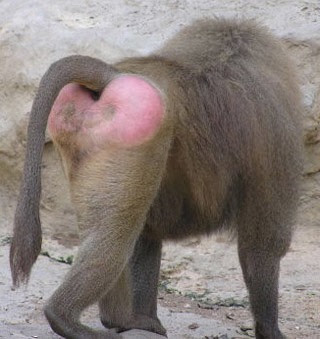 "Rupert is a special baboon. He has a sixth sense when it comes to people staring at him. He can tell from a mile away. He can even tell if some inanimate object is staring at him. Why, just last week he put the smack down on his stuffed teddy bear," said Dr. Hammond.
When I asked Julie why Rupert is alone in a cage by himself she said:
"Rupert is a little beyond the curve for baboons when it comes to reinforcing social norms. He's so human-like in that respect."
When I pushed her further she said:
"He got a funny look from his grandmother. We called her Miss Loulou. He ate her alive and then urinated on her dead body."
That being said, I thanked Dr. Hammond and decided not to stare at Rupert again. But, to show that there was no hard feelings, I left him a banana. Rupert shrieked at me.
"Oh, he's allergic to bananas. And he got into a fight with one last week," said Dr. Hammond.
Posted by Michael Powers at 11:51 AM