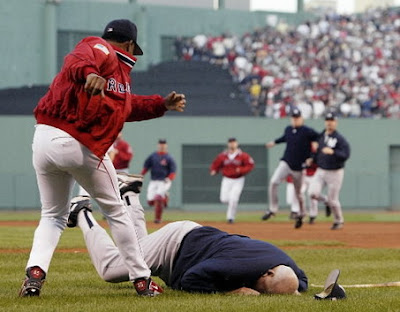 The Yankees didn't become a storied franchise until Boston foolishly sold Babe Ruth to them. The team with more history from the get go was the Red Sox.  The Red Sox had 5 World Series victories prior to 1918. How many did the Yankees have? None. We give them our best player, all of a sudden they win some. So don't tell me we're just bitter and have never been nice to the Yankees.
On another note, after Johnny Damon opted to play for the Yankees for more money that the Red Sox were offering after 2005, the Yankees haven't won a series. The Red Sox won the last one in 2007. Silly Johnny (you looked better as Jesus). In fact, the Yankees haven't won since 2000. Of course it's only an 8 year drought as opposed to the 86 year drought Boston had, but with a little faith from the Fenway faithful, we might be able to extend New York's bump in the road. 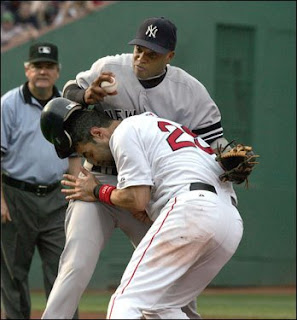 But, before I go deep into this, let me remind you that I have nothing against New York. I love Mets fans. I even tolerate Dodgers fans (a team that used to be located in Brooklyn, but got moved to LA). But, I cannot tolerate Yankees fans.  I speak in general, because I have some good friends who are Yankees fans, but they, to me, are legitimate. A lot of people are just fans because they like the hats, they think that 'being from New York' is a good enough reason, or they had a boyfriend who was a fan. Those are all lame rationales. The real fans have Yankee blood, are die-hard at the games, and would get into a fight for any reason with a Red Sox fan. And, the same goes for any fan of a Major League team. But, even with the die hard Yankees fans, who would you pick to win in a fight:
a) a team who has won 26 World Series titles, feels entitled to win every year, buys whatever player looks best for exorbitant sums, and has more celeb and wall street fans, or -
b) a team who has only won 7 World Series titles, had an 86 year drought (where it came very close a couple times only to be cursed), and whose fans are pub owners, dock workers, and a smattering of southies?
I think I take the more punished fan base with more blue collar types. Boston fans can beat the crap out of Yankee fans. Think about it. Do Red Sox fans fear being pummeled in New York if they go to cheer on their team? Now, thinking in the reverse, do New York fans fear going to Boston to cheer for the Yanks? The answer to the first is an obvious no, but the second is an obvious yes. Fenway is a smaller park, and sits deep in the heart of Red Sox Nation. In New York you still have Mets and Dodgers fans, and the people are more apathetic about their team. They've become desensitized because of their success. They feel entitled. And until that attitude stops, they will not win. 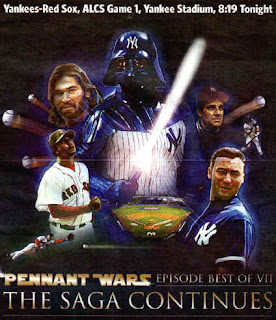 There is a reason the Yankees are called 'The Evil Empire.'
Pictures taken from: here and here and here.
Posted by Michael Powers at 8:43 AM

I hate to break it to you, but the Red Sox really have become the Yankees. Look around all you see is Red Sox gear now, the Yankees have virtually disappeared. I mean that is a plus because that means your team is better, but they're also trendier. Of course the one I don't completely understand is the continued hatred for the Patriots. "Americans love a winner and will not tolerate a loser." - Gen. George S. Patton, Jr. Of course, after this season, maybe that's why they don't like the Patriots, can't tolerate a loser...

On that Patton note, the movie 'Patton' is a pretty good one.