So last night, as I assume many of you were, I was watching the Major League Baseball All-Star game.  The game was intense, lasted almost five hours, going 15 full innings, and in the end, the American League beat the National League for the 12th undefeated season.
But that's not what I want to write about today.  The thing that stuck out most were the commercials.  And apparently, the summer classic's advertising demographic.  The advertisers were Viagra, Flomax, Just for Men, and a tone deaf monkey screaming (not singing) 'Take me out to the ball game,' for some youtube.com/MLB contest.

Of course there were other ads from Chevy and other companies, but most of the ads were definitely directed at the Baby-boomer crowd (plus 40s).  So I began to think to myself, "Could it be that MLB has no new fans?  I heard that the average baseball fan is 29...so maybe it's true.  I'm not even 29 yet, but what happens if our national pastime dies with the boomers?"
It would be very sad.  It is a beautiful game.  There is so much math, interesting rules, and history.  Legends were made, nations formed, and familial relations were given new life.  Going to a game with your father, or playing catch is a rite of passage in this country.  I'd hate to see it die.  But, I imagine if many more All-Star games go to 15 innings and 5 hours, people might not have the attention spans anymore.  That, and maybe people are getting embarrassed watching 50 year old guys rocking out on stage with hair color commercials and old dudes with giant smiles and sky blue tuxes running their wives up and down stairs with 'viva viagra' playing in the background. 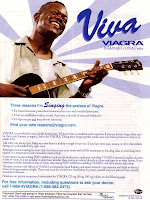 Who knows?  I thought it was funny, and even told one of my friends he'd be the first one of us to use Viagra.  He laughed and said, "I already do."
Posted by Michael Powers at 12:47 PM