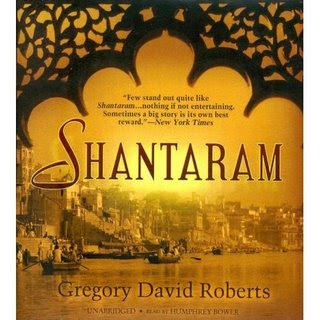 Just recently I purchased a book on a recommendation of a friend. The book is called Shantaram. I haven't started it yet because I'm still reading a book by Richard L. Holm called 'The American Agent.' The latter I know is good, and I recommend it to all of you. Especially if you don't like the CIA.

FYI - Everything the CIA does is known to three groups before it does anything: the President, the National Security Council and select senate and congressional oversight committees. However, if they screw up, all three of those groups deny culpability and blame it on the CIA. If they are successful, you don't hear about them, but the President gets all the credit. Not to say that the CIA hasn't screwed up in the past, but they've got an unfair portion of the blame. It's a 'damned if you do, damned if you don't' catch-22 for them. Often they are told to do something by the President that they don't want to do, but have to, then get blamed when it doesn't work. Anyway...I'm rambling.

But let me just say one thing about Shantaram. This caught me immediately. Here is the 'About the Author' section:

"Gregory David Roberts was born in Melbourne, Australia. Sentenced to nineteen years in prison for a series of armed robberies, he escaped and spent ten of his fugitive years in Bombay - where he established a free medical clinic for slum-dwellers, and worked as a counterfeiter, smuggler, gunrunner, and street soldier for a branch of the Bombay mafia. Recaptured, he served out his sentence, and established a successful multimedia company upon his release. Roberts is now a full-time writer and lives in Bombay."

I think that's all I need to say. Read the book.
Posted by Michael Powers at 10:28 AM

I wish I read more of anything other than blogs and tech manuals :) This looks like a good one, maybe I'll pick it up