Man wants to be legally declared a chicken 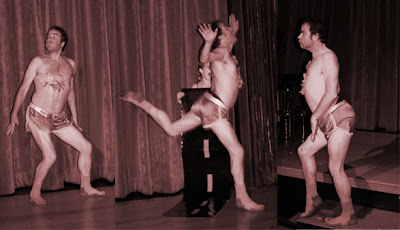 Perhaps you've heard the story that was all over the news stands several months ago about the "man who gave birth." With a title like that and pictures that showed what seemed to be a pregnant man, it sold a lot of copies regardless of who printed it. It's popularity came about because of its absurdity. And, in fact, our suspicions were confirmed when it turns out the "man" was actually born a woman and even participated in beauty contests.
However, she/he felt that she/he was not meant to be a woman, passed a series of psychoanalysis tests, and legally became a man. She then began taking hormones and supplements and had her breasts removed. But, she/he didn't have a complete sex change, and that allowed she/he to have a child, and now even become pregnant a second time.
Because of she/he's increased popularity and press coverage, other people are following suit. All across the US people are making moves to declare themselves legally something they are not (at least physically).
The most interesting case comes from Washington State, where a man named Leroy Jones wants to be legally declared a chicken. Having grown up on an egg farm, Jones said he learned to love the chicken lifestyle, from pecking and clucking to even the occasional cock fight.
"I love the taste of chicken feed. It's just so crunchy. I also feel accepted among those in the chicken community. One day I hope that I might even be able to contribute, and lay my first egg," says Jones.
Jones has been undergoing chicken gene and hormone therapy, that he self-administers each day in the form of shots. He has begun growing feathers on his arms, and says that in a week he will move out into the chicken coupe.
His wife Carol thinks it's just a phase. "Last time he wanted to be an astronaut and he painted our hay silo like the space shuttle. Now he wants to be a chicken. Everyone has a mid-life crisis, and at least his is a whole lot cheaper. I don't have to cook for him anymore, or worry about him buying a new sports car and marrying a bunch of random dancing girls from Vegas. He's chasing chickens," said Carol.
Before leaving the premises I left some feed for Mr. Jones. He clucked exuberantly and was followed to the feed by his new found family.
God bless the chicken man.
Posted by Michael Powers at 4:47 PM