I dance to the beat of my own drum. If the beat of my drum happens to be American Indian tribal dance, Zulu wedding dance, Depeche mode, Led Zeppelin, or Berlin night club...that is what I will dance. Just as I dance to the beat of my own drum, so does McCain (however, I don't think he is quite so literal).
I am not a devout McCain supporter. Let me start with that. He has a habit of frustrating me. He doesn't dance to his own drum beat. He marches forward with it. He has a history of reaching across the aisle to get reform done. He works with democrats, independents, and republicans. That is something that cannot be denied. He is nobody's b*tch. And, although it can be frustrating to a lot of people, it is a good sign. It means he puts his own judgment and America above that of partisan politics. Aside from drawing in independent and democratic voters, there is a bit in the maverick image that attracts even conservatives (some would argue that what really attracts them is Palin, and that's true too - she's hot), but knowing that he is not anyone's puppet is comforting (I know Bush has been everyone's puppet at one time or other). And, as much as I like puppet shows, I don't want to see that happen again. 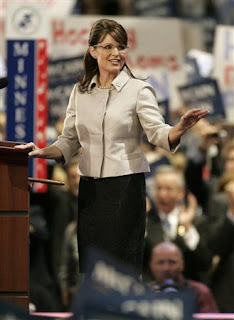 McCain's speech last night was a responsible one. It pointed blame where it needed to, - he accepted that his party became corrupt with power in Washington - and he called for unity (and given his habit of bipartisan reform, he can really claim that call more than Obama, who has no such record), he called for energy independence, he called for transparency and accountability, and he called out for controls on government spending and excess taxation.
On the topic of energy independence his approach is all-encompassing. The energy question does not need to be mutually exclusive, and he proved that. It's not fossil fuels versus green energy. A responsible plan uses both. He called for clean coal technology, natural gas, nuclear power, wind and solar power, electric and flex cars, and drilling. There is a responsible way to do all that. There is a sustainable way to drill, to use coal, and other fossil fuels (and if we don't use them, we are wasting our own potential and shooting ourselves in the collective foot). And, while we use the more economically feasible and well-studied techniques involving fossil fuels, we can concurrently develop more sustainable green energy so there is a smooth transition.
But the big issue my friends is medical care. McCain said Obama's plan puts a bureaucrat in between me and my doctor. That's true with universal healthcare. Why do people seem to think the government will do a better job with our medical system than competitive, hard-working, private individuals? It boggles my mind. On that point alone I see it imperative to vote for McCain, who claims to have a much more useful reform in mind.
PS - I will continue to dance to the beat of my own drum, right now it's t.A.T.u. - for McCain it's whatever is in the best interest of America, and it will take him to the Oval office. Do the research people! Just because Obama is good-looking and speaks well, doesn't mean he should take the reins over the most powerful nation on the planet.
Posted by Michael Powers at 10:09 AM

Just because John McCain was shot down forty years ago and was willing to sell out all of his own political values in order to get the nomination of his increasingly theocratic and xenophobic party, to the point of saying in the primary he would now vote against his own immigration bill (!) does not mean he should be president.

As Joe Biden said, sometimes we need more than soldier -- we need a leader.

I'd also posit that anyone who thinks that retaining our current hugely inefficient and massively unfair healthcare system in the hands of private insurance companies likely has little experience with either health insurers or poverty.

It's almost as though, in their theological attachment to free markets, the contemporary dead-enders that compose the GOP have replaced the altar of brotherly love with that of Milton Friedman.

McCain hasn't sold out. He's the same guy I didn't want to vote for in the primaries. But, now with Palin and his age, I'm encouraged.

Biden's 'soldier not a leader' insinuation is asinine. McCain is both. And, McCain beats Biden in military leadership experience as well as legislative/executive credentials (being on many more important committees by far). But, to be true to myself I don't particularly care for either. But, forced to choose between a ticket that promotes a far-left socialist agenda, and then calls itself above partisan politics (with Obama's most liberal voting record in the Senate and Biden not being much better), and a ticket that promotes a right-centrist agenda, and makes the claim to be above partisan politics (with a record to prove it in both McCain and Palin), I pick McCain/Palin. Hands down.

Furthermore, our healthcare system is obviously flawed, but government is not going to make is better unless it only provides ideas and guidelines - not a complete takeover.

And, on another note, brotherly love can only go so far. We believe in agency. Stand on your own two feet. Of course there are exceptions. Some people need help, but the great majority are competent, capable people with the God given blessing of being an American citizen (that means they choose their own path).

By the way, did you know that Obama wants to start a national youth corps where kids are paid and given bonuses after serving etc. Smacks of Nazi youth movement; or communist youth groups.

Wow, Mr. Powers has managed to both wildly distort Obama's record and gloss over the frightening theocracy his own party has endorsed, all while throwing a good bit of nativism ("I'm voting American" -- seriously?) into the mix. Bravo!

McCain is a bad leader if you want to characterize him as such -- wrong on Iraq, wrong on the economy, wrong for America.

I don't see how a woman who wanted to ban books from the Wasilla library that she didn't like; who endorsed Alaskan secession and is a big fan of Jews for Jesus, can in any case be called "center." The truly asinine thing is the GOP's sexist belief that women will vote for Palin simply because she has ovaries. This will not play well among people who are not already in the GOP base.

By the way, where was it where Obama said he was going to nationalise the means of production and usher in a dictatorship of the proletariat? Because that's an _actual_ "socialist" agenda, something no American politician has ever proposed, and certainly not Obama or Biden, two of our more business-friendly pols on this side of the aisle (too much so, for me). Words do mean something, you know. Despite what Michelle Malkin and NRO have to say, to call Obama a socialist is simply risible.

Also, the whole Godwin's Law point holds -- when you're reduced to invoking Nazism, maybe your argument needs reexamination. But if we do want to go down that road, McCain's "national greatness" conservatism that he ran on in 2000, and the bankrupt militarist adventurism that constitutes his foreign "policy", are far closer to fascism than Obama's domestic version of the peace corps. Or is the peace corps also the equivalent of the Hitler Youth now, Monsieur Powers?

Life, Liberty and the Pursuit of Happiness -- Obama-Biden '08.

(how was Brazil? When do you finish school?)

I'm in class right now, so I won't address your large response to which I will have to demur. But, on a different note, Brazil was great. I got in touch with old friends, saw the countryside, beaches, ate great food, saw some parks, art museums, and reconnected with that beautiful country.

I finish school in April (finally). I am doing my last batch of classes this semester, and a just a capstone course next semester (which is like an undergraduate dissertation). And, having passed the first part of the FSOT, I am hopeful that I move on to the next phase...but we'll see.

Sounds good, I hope the exams go well. You'd be great in the Foreign Service.