The city once known as Bombay is a beautiful place.  Now it is called Mumbai, a change made by an adamantly pro-India, anti-British colonialism political party.  I read most recently a fabulous book that took place in Bombay, before it became Mumbai, but it is still the same place.  In the city there are well over a hundred different languages and dialects, amazing food, smells, beaches, culture, and tradition.  The book that enlightened me to this place was 'Shantaram.'  I mentioned it in a previous post before having read it, and I am now following up. Shantaram is now one of my favorite books.  And, I think that says a lot with the amount of books I read.  It is over 900 pages of brilliant writing, imagery, and philosophic depth.  It is a book you cannot simply nibble, but must savor and devour like a succulent and eloquently nuanced dish at a great restaurant.  And the theme that stays with it more than any other is 'Love.'

In India there are more than a billion people, and not too far from now will surpass China in population.  And, it is about six times the size of France.  However, paraphrasing the author Gregory David Roberts, it is a tribute to the love of the place that they all get along with relatively few serious incidents.  Sure, there are battles, riots, etc., but over the years they have generally coexisted well with one another in peace even with hundreds of differing cultures, religions, and languages. 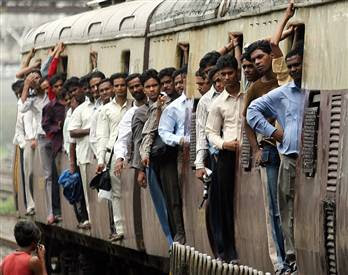 There is a part in the book where the main character is boarding a train to go to the country.  As everyone wants a good seat, there is pushing, shoving, and clamoring for space.  But, as soon as the train starts to leave the station people are calm and composed, offering food, kind words, and smiles to their neighbors even with feet in their faces, and overly cramped quarters.  In other words, there is order when it is most important.  If a similar size country had a billion Americans, Australians, or Frenchmen, you can be sure there would not be that kind of civility and calm.  And that is why India, and Bombay specifically, are the world capitals of love.
Posted by Michael Powers at 4:51 PM

Oh come now, Philadelphia isn't called The City of Brotherly Love for nothing. I mean watch an Eagles game and you will see some of the most charming, gentle, and loving people ever. Now that is a people of true civility and love.

haha. Yeah...nothing more brotherly than a philly cheese steak, but filial love isn't the best kind. The most beautiful women in the world is from India: Aishwarya Rai. Now that's love.