Chatting on the Road Trip: Freedom and Equality 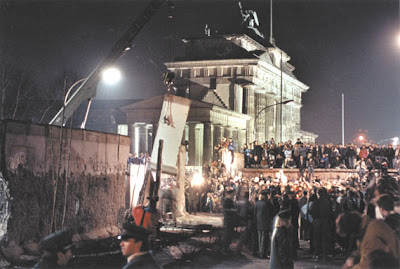 (Berlin Wall Coming Down)
Now, you may have noticed that I have not written anything for four days, which, while unfortunate, hopefully did not cause any lasting damage to anyone's worldview. I had a good discussion yesterday while driving back from San Francisco to Provo. I cannot say my excuse is that I was having a four day long conversation in the car, but I will say that camping out on California beaches is not particularly conducive to blogging. Our conversation was expansive and we talked about government, the economy, freedom, purpose, and life in general. I wish you were all there. You probably would have learned something. We had some interesting view points from all sides. The two people who led the conversation were me and my friend from Hong Kong (so this was not just a domestic politics discussion, but became international as soon as my friend opened his mouth). Another contributor lives in Utah but was raised in Oregon. So, while not all demographics were equally represented, I think we dug pretty deep when it came to what really matters.
But, that being said let me just say something that might shock you. THE GOVERNMENT OWNS YOUR SOUL. Some might find that ridiculously unfounded and over the top. In some ways they would be correct. In other ways perhaps not so much. Nothing is ever as superficial as it seems. Other than the fact that the government has spy planes watching your every move, and puts mind controlling drugs in our water supply, the government is not just about politics. And, even if they were, politics is invasive (Like a root canal that somehow turns into open heart surgery).
The government in the US, and in any country for that matter, is supposed to provide some sort of semblance of order and provide basic protections for individuals, families, and groups. But, unfortunately, the government quite often does a fairly shoddy job. Part of this stems from the efficiency-corruption continuum, and part because of how democracy and bureaucracies work. In the efficiency-corruption continuum you have on one side the most efficient form of government, a dictatorship, but with the possibility that it could be entirely corrupt and affect changes that completely annihilate human virtue. On the other side you have a socialized democracy that has so much red tape that it never gets anything done, but does not do so much damage if it is corrupt because there are so many voices and none can do more harm than another. Neither case exists in the US. We have a melange of the two that leans both ways. But here's the catch. You don't have to lean just one way. It's not really a continuum. 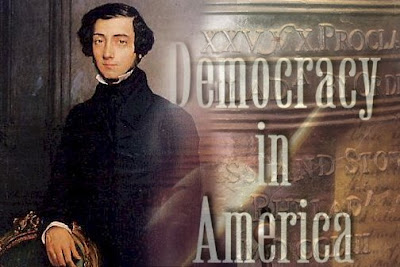 As Alexis de Tocqueville pointed out in his famous book Democracy in America, democracy's greatest tendency is towards centralization, bureaucratization, and consolidation of federal power. This is because in a modern democracy the desire for equality supercedes the desire for freedom. That is because democracy tends to flatten people. Not literally, but spiritually. In a democracy without any aristocratic vestiges like juries, courts, religion, free associations, or high ranking people to look up to, people tend to look in three directions. They look to themselves for guidance, the majority for guidance, or history for guidance. All three lead to the same conclusion. "I am insignificant and I am just a grain of sand awash in an endless sandstorm, therefore I follow the sandstorm." Instead of people finding something substantive to back their desire for equality like human virtue or God, they only want freedom to express an undefined vision of themselves that is defined by history and the majority. It is equality by default. Equality for the sake of equality. "What is good for me is good for me, but not necessarily good for you, and we can both be equal because no one's opinion matters more than anyone else's - they're all good!" It is simple relativism.
So what is the solution? How can we prevent people who, in their weakened self-deluding state, give the government more power over their lives because they want equality at all costs? How can people find meaning and purpose in their lives? Well, there is no simple equation. There is no all-encompassing theory. And guess what? That's okay. In a general sense we can see a need for aristocratic freedom. Rights have value because we are all human and there is something transcendentally good within us, whether you believe it comes from God or elsewhere. We need to believe in a foundation. And, we should all get involved, form groups, associations, coalitions, and provide some vertical lumpiness to our otherwise flat and unguided democracy. We need lawyers, judges, juries, newspapers, federalism, God, and upstanding strong-willed and morally ethical citizens to look up to. We need to believe that there is value in tradition and in the past while looking open to the future. However, we cannot sacrifice meaningful freedom and equality with the mantra of "change" or "progress" for the sake of progress and change. There must be purpose. 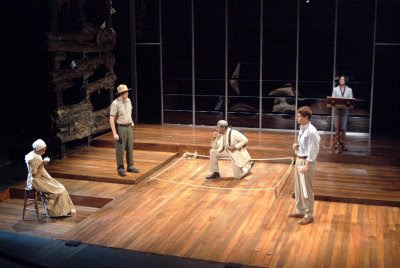 This is an analogy that should help it all settle a little better for you. Let's suppose you have a house. But the house has no walls, no doors, no windows, no roof, no yard, but is just a vacant lot. To have freedom in that home is meaningless. What are you free to do? You are free to be free, but without any stairs, chairs, or doors, there are no real possibilities of exercising freedom. So, your house must have furniture, rooms, walls, windows, and maybe even a nice garden. With substance you have real freedom. With substance you have real equality. Without it you have relativism.
Posted by Michael Powers at 10:55 AM

Lots of interesting stuff here; not that I agree with all of it (esp. the aristocratic part -- I'm a Jackson man!), but nevertheless it's thoughtful.

I wonder about your last paragraph, because it seems to lead you in a direction I didn't see you going down with the house analogy. It reminds me of British liberal economists and philosophers in the early 20th C. who were revising a lot what they believed in; one of the arguments they made was that freedom of contract was meaningless in the face of the vast disparity in power between, say, a starving factory worker and the millionaire owner of the factory. Just as, in your analogy, we can live in a house and be "free" but be unable to actually live, so do they say we can be de jure free but de facto enslaved. You get a lot of the modern labor movement and interventionist government out of such reasoning (which I, being me, applaud. I think that's a tautology, but you get the idea).